Hlavní navigace
Root.cz  »  Texty  »  Ken Steen: I probably would not be programming if it weren't for open source software.

Ken Steen: I probably would not be programming if it weren't for open source software. 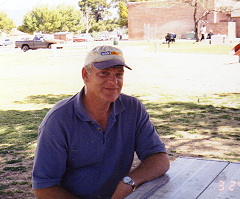 Old. 52 The first computer that I ever used was for a Fortran class in college. The programming was done using punch cards on a mainframe computer. I didn't like programming at all then. You would punch out the cards and then hand the stack to the computer operator and wait until they could be run. Then you would get a printout with your errors and go back to the card punch machine to fix your mistakes. I didn't use a computer again until many years later when the personal computer became available.

3. Why did you start with develop of vifm?

I started vifm when I was looking at the source code to emelfm. I had just taken a class in C programming and was reading a lot of different open source program code to try and learn how to put a program together. I noticed that I could change a few lines of code in emelfm and it would have the basic jkhl key bindings of vi. I submitted a patch to emelfm and kept playing with the source code to make it more vi like. Eventually I had changed the program enough that I released it as Vide. It was a Gtk+ based program at that time. People emailed me and asked me why the program was written using Gtk+ when it made more sense for it to be a console based application. I agreed that it would work better as a console application so I rewrote the program from scratch using ncurses and renamed it vifm.

I use vifm everyday. It fits in with the way that I use my computer. I set up vifm with commands for mutt for my email, cplay for music, vim for editing, a vim script for a calendar program, and pinfo for accessing man and info pages. All of them use the same basic vi key bindings.

5. What do you think about mc, krusader and other?

There are a lot of good file managers available. Most of them are coded better, and have more features than vifm. The only one that I currently use other than vifm is Thunar. It strikes the right balance for me between ease of use and speed. I think that vifm is a good example of scratch my itch software. I wrote it because I wanted a file manager that would let me navigate my file system in the same way that vi edits a file. Other people have found the program useful but it will always be a niche file manager. You might like using vifm if you like to use vi to edit files but for most people there are other file managers that will work better for them.

6. Are there other developers?

Various people have submitted code to vifm. Usually it is either a patch for a bug that annoyed them or a patch to add a specific vi feature that they wanted added.

7. Do you have feedback from users?

I get some emails from users. Bug reports and feature requests are the most common. People who use vifm differently than I do find errors that I have never seen. It may take some time before I can fix the problem and get a new release out but I do keep a list of things that people request and bugs that need to be fixed. My real job has nothing to do with computers and programming is just a hobby for me so sometimes it takes awhile for me to figure out how to implement a feature and if it is something that I don't find exciting, like writing documentation, it can take even longer to get done.

I use vifm and vim for programming. I have tried a few IDE's and different editors but I keep comming back to using just vifm and vim. Now that vim has a console file browser I could probably get by just using vim but I am used to using vifm for selecting files and searching for man pages.

9. Why do you use this (previous question) tool?

When I program I usually have several terminals open all of the time. One for the code that I am editing, one for man pages, one for example code, and one for general desktop usage. I can quickly alt-tab between the different windows and by using vifm, vim, and pinfo, all of the applications use the same basic key bindings and my hands never have to leave the keyboard. That system just seems to work the best for me.

Programming is strictly a hobby for me so I work on vifm when I have the free time. If I am working on something interesting I will work on it for a few hours everyday until I get it done.

11. How much time did you need for vifm?

That is hard to answer as I have gone long periods without working on the program. Since computers are a hobby for me if I find something interesting I will play with that instead of working on vifm.

12. What do you think about open source?

I probably would not be programming if it weren't for open source software. The free development software and all of the excellant code examples are what I use to learn how to put programs together. While there are a lot of advantages to open source software, the amount of information that it makes available is what I appreciate the most. Since your article on vifm a patch was sent to fix a buffer overflow. I assume that it was from one of your readers as it was from someone in Chekoslovokia. Even a tiny project like vifm benefits from being open source.

13. Why do you use Linux on your computer?

It lets me work the way that I want to. I have tried other open source operating systems, FreeBSD, OpenSolaris, and OpenBSD. They can all be set up to run the same way that my Linux system is but I keep coming back to Linux. Mainly because Linux is where most of the new development happens and it is what I am the most familiar with. I built a Linux from Scratch distro when the LFS documentation first came out and enjoyed the experience but currently I am using Xubuntu as it is so easy to setup and use..

I started using Linux with RedHat 5.0. I'm not sure of the year but I remember what a pain it was to install Linux the first time.

15. Did you add something into kernel?

I'm not nearly a good enough programmer to work on the kernel.

16. Did you add something into other open source applications?

I have submitted a couple of patches to different programs but I haven't really worked on any open source program and most of the programs that I have sent patches to are no longer even being developed.

17. Did you make some other applications for Linux?

I really haven't written anything other than simple little scripts for my own use.

I am currently trying to port vifm to Windows. The PDcurses library makes most of the port easy. The biggest problem is that I have never programmed in the Windows environment so I spend more time trying to figure out how to do something than I do actually programming.